Jewish Divorce and the Get

This article sets out the applicable law and procedures surrounding Jewish divorce.

A Get is a Jewish divorce; it occasions the divorce according to Judaism. It is pronounced in the Jewish courts – the Beth Din.

The basic Jewish divorce requires the consent of both the husband and the wife. There are no additional requirements such as unreasonable behaviour or adultery, for example, as in the jurisdiction of England and Wales. The Get is written by a scribe on the instruction of the husband, this is then handed to the wife in front of the Beth Din. However, a Get is not recognised by English courts; the parties require both a Get and a civil divorce.

If the husband refuses, the wife is unable to religiously divorce and/or remarry according to Jewish tradition. Affected women are considered an ‘agunah’, a chained woman. Only in rare circumstances can the wife remarry and receive a Get from a rabbinic Beth Din upon refusal by the husband. Where the husband finds himself in the same position, he is known as an agun, a chained man.

Any children borne from a future relationship, following the Get refusal, would be considered illegitimate (‘mamzer’) in Jewish status. It would also prevent that child and their descendants from marrying in Jewish law.

The wife would be deemed an adulterer in the Jewish community in the event a sexual relationship with another man was commenced. This is the case even where a civil divorce has been obtained by the English and Welsh courts. Her standing in the Jewish community generally would be impacted; the ramifications for Jewish women and their children can be life changing.

The withholding of a ‘Get’ can be considered a form of domestic abuse: the Government has recognised that the refusal of a Get ‘will have a significant impact on the wife’s living conditions.’ Controversially, where a Get is refused, forcing that person into acceptance can also be a form of coercion. The Jewish Court will then rule the divorce invalid as a result of coercion.

Section 10A of the Matrimonial Causes Act 1973 helps those Jewish wives or husbands that are refused a Get. This section provides the court with the power to order that a decree nisi not be made absolute until a Get is provided. The court will use its powers if it considers it just and reasonable to do so, as evidenced in the case of Moher v Moher [2019] EWHC Civ 1482. The section is a bargaining tool for the party wishing to obtain a religious decree of divorce. However, it is not always effective, for example, where the party is impartial to a civil divorce.

Until a civil divorce is obtained by the English courts, the parties are still deemed legally married, and neither party can remarry under English law. Their entitlements to financial remedies pursuant to Part III of the Matrimonial and Family Proceedings Act 1984 are weakened. As a result, prenuptial agreements are now strongly encouraged within the Jewish community, including a term stating the parties will provide a Get in the event of matrimonial breakdown.

Speak to us about religious divorce advice:

Please contact our lawyers for initial advice on religious divorce. Send us a ‘call back request’ and we will call you (usually within 12 hours) to discuss your options.

You may be interested to read our advice on divorce through the English courts and extensive blog on divorce advice for expats. 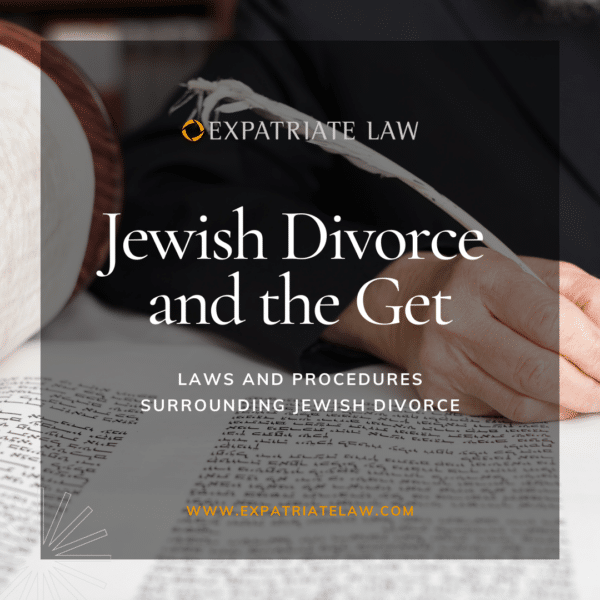