Julie and James were married for 26 years and had three children before they divorced in 2020. The youngest two children are still in education and are financially dependent on their parents. All children live in England. An agreed financial consent order was signed by both parties and submitted with the court the same year. The consent order contained a provision that James pay Julie spousal maintenance each month.

Julie had not worked since 2009 because she divided her time between the UK and Dubai to care for the children. She was entirely financially dependent on James throughout the marriage and following the divorce. James was employed in Saudi Arabia as a Director in 2019, earning a considerable amount.

The consent order was in place for a year, however, in 2021 James’ solicitor’s informed Julie directly that he had lost his employment without notice or redundancy.  Whilst James made the maintenance payment for the month of July 2021, he told Julie he was no longer able to pay, and has not paid for the months of August, September, October and November. Julie was informed, without an agreement regarding the termination of the order, James would issue an application for variation of maintenance.

The First Appointment was heard in November. Following that, it was determined that James had not been complying with the consent order as it stood, as such an application for enforcement has been submitted. A further application was also made for an Earning Capacity Assessment to be conducted, to provide a report on James’ potential earnings, following redundancy.

Both these applications are due to be heard in the Spring of 2022. The FDR will be the following month. Watch this space!

Vanessa sought an order for relocation of the children 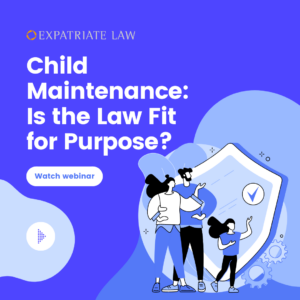 Child Maintenance: Is the Law Fit for Purpose?